We are not the usual mix of riding buddies.  Actually, when we first met as coworkers, I was the only “oddball” that had a motorcycle.  Even our professions, other than that we all worked for the same bank, had nothing to do with each other or motorcycles in any way.  I was the HR guy with the wanderlust and about 200,000 miles under my tires on BMW motorcycles, Gerry was the head of 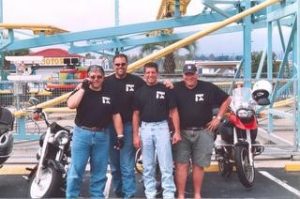 real estate and facilities, Joe headed up fraud investigations and was a retired State Trooper with a few too many bullet holes in him, Rich was the corporate attorney and bicycle racer and Frankie headed up a huge 24/7 call center.  What we had developed though was a friendship that transcends normal working relationships.  We truly enjoyed each other’s company and never embraced the endless rounds of golf and cocktail parties that some executives seemed to gravitate towards.

For some reason, probably because of my coaxing, each of them soon acquired a motorcycle. Joe, liking comfort and tunes initially elected a K1200LT and eventually a Goldwing, Rich being more in tune with adventure and handling opted for an R1200GS like me.  Gerry and Frankie went the HD route with Gerry opting for the HD Ultra Classic with the “boom box” speakers and enough storage space to bring anything he wanted and Frankie being the “coolest guy any woman could hope to meet” had a Fat Boy and V-rod. 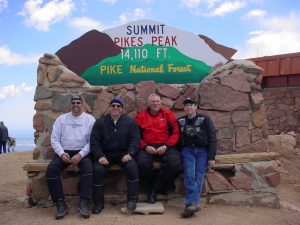 Our initial rides were short day trips.  Joe, knowing I had been the founder of the BMW MOA club called the Mac Pac, soon suggested we needed a name.  He suggested what sounded to me like the “Fat Pac”.  Now me being on the north side of 350 and Joe being not far behind, initially I was taken back by his suggestion.  He promised me I was totally off base and that what he meant was the “PHAT PAC”.  I asked what that spelling meant and he said “Physically Hot And Tempting,” and quickly added that “Frankie can be our poster child.”  You see, Franke was one of those guys blessed with that look, body, and personality women swooned after.  When he entered a room they all turned to follow him. It was always amazing to watch.  You get the picture.  Who wouldn’t want to be part of that group of riding buddies?  When asked for a name for a restaurant reservation Joe always quickly gave the name ‘Handsome”.  We would all snicker when the hostess without thinking would call out “Handsome party of four, your table is ready.” 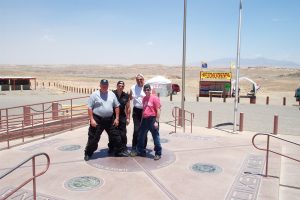 In the early days our time together was all bliss, as we like to say, it was filled with “miles and smiles”.    Then one August, tragedy struck.  Frankie was playing a round of golf at a company outing.  He had dropped his phone on the floor of the cart and just as he bent down to pick it up, the driver turned the cart slightly and he fell out and hit his head on the cart path.  He died later that night leaving behind a young wife and three small children.  We were devastated! We decided then and there that the Phat Pac had to remain together and accumulate many more miles and smiles in remembrance of Frankie. None of us remain working for that bank today, but we continue that close friendship that will last a lifetime.

Since its inception back in about 2005, we have been on over 15 week-long trips, all over the country including some in Canada.  Some have done “fly and ride” trips where we rented bikes, there have been a few trips where I trailered the bikes to keep the time away from work for those not yet retired to one week, so we could maximize our riding miles on the best motorcycle roads in America.  Each has had a theme such as the “High Points Ride” that tied together a route hitting the highest elevations in 6 eastern states.  Others have been “The Pacific Coast Ride”, “ The Colorado Passes Ride” that tied together 12 mountain passes over 10,000 feet plus Pikes Peak, or the “Romp through the Ozark’s” along with a host of others.

The most amazing thing about this unlikely group is that the chemistry between us has remained the same.  We have never had a moment of friction between us, either on or off the bikes.  We have been blessed with over 60,000 safe miles of riding in all kinds of weather and road conditions. Yes, I have gotten us into snow on more than one occasion, but we laugh it off and ride on.  Well kind of….. they did make up a special T-Shirt for the first time I got us into 13 feet of snow in southern Utah at Brian’s Head Pass.  I won’t elaborate, but I have never lived it down. We have at times invited another rider along with us. Some have worked out and some have not. It only takes one not in sync with the others to ruin a trip, as many of you have experienced, I am sure. Our riding styles all work well together with each member being aware of the group consensus and being courteous to the others in the group.  We ride at safe speeds, stop whenever anyone in the group wants to, and stay at nice places in the evenings.   We always top off our tanks at fuel stops, never extend the stop when others are ready to leave, eat meals when the group feels like it, and make hotel reservations by group consensus.  These are all things I have seen ruin group dynamics in other riding groups I have been involved with in the past. I believe the key is true respect for each other and a high level of flexibility within the group.  We really don’t care where we go, or what we have to deal with, as long as we are together.  That to me is the real magic of the Phat Pac.  One of our riders, Joe has given up riding but is still active with the group.  He has had two knee replacements now and questions his ability to handle a heavy bike in off-camber situations.  I think being a former trooper and seeing close up what can happen when things go wrong, it started to work on him.  We surely miss him on trips, as his stories kept us in stitches many evenings. We still get together regularly to break bread or go play in the waves on Joe’s jet skis. This fall the Phat Pac will again be heading out to the Pacific Northwest to explore BC and Washington State. I can’t wait and have already begun the route planning process.

My advice to anyone looking for a touring group to ride with is to do your homework first. It is always a good idea to start out with a modest two or three day trip at first to see how the group dynamics play out.  You need to enjoy the company of the people you will be riding with. You also need to have similar riding styles or be willing to adapt to the norm for the group.  Above all else, I think you must be flexible and work out how trip decisions will be made in advance or on the fly.   If you feel friction when going through this process, do not try to put square pegs in round holes.  Move on and work on assembling a group where these things are in harmony. It will pay dividends in the rides you will experience in the years to come.